Pune Is Paying Attention To The Technology Innovations In Manufacturing


The Industrial revolution was a defining moment in the history of humankind. It was arguably the first and the only event that single-handedly increased the world’s population manifold times, boosted personal income, and rapidly fueled the economy of many nations. Since then, the world has seen enormous improvements in methods of manufacturing; from the assembly line to industrial robots, the sector has consistently challenged the status quo and developed better ways of production.
The Government of India is ambitious and leaving no stone unturned in creating the best-in-class manufacturing infrastructure which in turn, will develop a robust production-backed economy. Presently 16 percent of India’s Gross Domestic Product comes from the manufacturing sector. Prime Minister Modi’s “Make In India” initiative aims to provide an impetus tothe manufacturing sector and to contribute 25 percent of India’s GDP through this sector by 2025. If India’s communication revolution was the first wave, the “Make In India” initiative is set to bring in the Second Wave. Given Pune’s traditional tilt towards the manufacturing sector, this is all good news. Even better news is that the sector seems set to transform even more. Here are some of the path-breaking technologies which are making waves in the manufacturing industry today:
Additive Manufacturing, also known as 3-D printing has become the poster-boy of the manufacturing industry in recent times. It instantly caught the fancy of people and elevated itself to the ‘next big thing’ since the invention of the internet. Invented by Chuck Hull in 1986, this technology is most helpful in rapid prototyping, where a physical object is fabricated from a computer aided design (CAD) data. This CAD file is created using a 3D modeling application or by using 3D scanners (to duplicate an existing object).  Within the past few years, this technology has evolved so drastically that today it is possible to make physical objects using metal, plastic and even mixed materials. The economics of using this technology for mass production is not yet viable at present, but the future is bright.
Internet of Things
The Industrial Revolution went through three phases until the 1950s. In words of Klaus Schwab, executive Chairman of World Economic Forum, “A Fourth Industrial Revolution is building on the Third, the digital revolution that has been occurring since the middle of the last century “. Internet of Things (IoT) is the threshold to the future, and all the advanced technology lies beyond this technological threshold. Although ERP has been around for a while, feeding in precise and objective data from various manufacturing units to the ERP circuit has been a problem. IoT equips machines and devices with their own IP addresses which return an unprecedented amount of data for processing. A fitting example would be that of a cooling unit using up more that its rated energy consumption. With IoT in place, the unit itself could carry out some detective work, deduce the reason for its inefficient operation and make a note to the customer and the maintenance team.
Nanotechnology
The first generation of this technology has already arrived and is changing the face of manufacturing in terms of product capabilities and cost efficiency. Nanotechnology refers to the ability to control matters on a molecular scale. At nanoscale, matters have unique physical and chemical properties that can be used or altered to create a new application. For instance, ArcelorMittal has begun rolling out a line of special steel that contains nanoparticles that enable them to make lighter beams with similar strength as that of conventional steel.
Bio-Manufacturing:
Bio-manufacturing refers to the production of bio-materials for use in food and beverage industry, medicine and industrial applications. Today we are surrounded by hundreds of bio-manufactured products but are unaware of their providence. Bio-manufactured products are found in the culture of microbes, blood or naturally or artificially produced plant and animal cells. A common example is amino acids which are widely used in enzymes and protein supplements.
Honorable mention: Micro-manufacturing
As the title suggests, this is the production of extremely miniscule objects at production facilities which possibly may fit in a large backyard. Micro-manufacturing is the antonym of the bustling mega-factories spread across the Asian and American industrial landscapes. A child of this technology is the tiny chiplet, no more than the size of a grain that would make it easier, and more cost-efficient to get the circuity to a device. Today, companies build large wafers with dies that contain electronic circuitry. This is being researched and developed by Xerox at its Palo Alto research facility. Presently, it is not viable to mass produce it, but in few years’ time, this epoch-making technology could emerge as the next generation tech in public eye.
With the advent of such sophisticated manufacturing technologies, IT companies in Pune will also find growing opportunities in providing the enabling and operating ecosystem for these technologies to deliver impact. For instance, IoT connects the physical world with the digital universe, and this communication can only be facilitated by software that enables collecting the information that is fed in through physical devices, organizing the data, analyzing and processing it and further passing it on through applications that the end-user sees and interacts with.
Today, we stand on the brink of the future. With millions of dollars spent each year in research and development of more sophisticated technologies, the future does hold the promise of creating more efficient manufacturing facilities and sustainable processes – and Pune will be watching with interest!

SEAP
SEAP was formed as an association of Software Exporters of Pune in 1998. The initial focus was to interact with various government agencies and provide member software companies the needed support for establishing efficient operations. In its second phase SEAP saw its membership grow and as larger companies made Pune its home, newer needs and newer ideas emerged. Seeds were sown to enhance collaboration within the industry companies.

COVID and Beyond – A View From SEAP 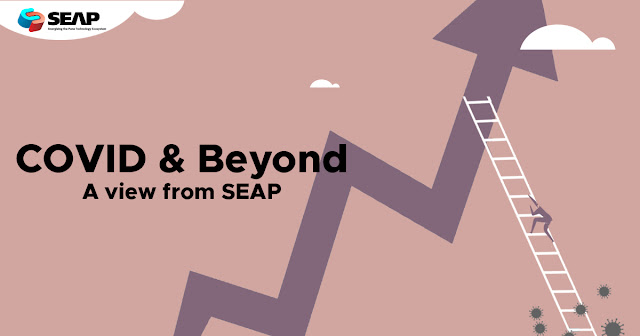